Dia Mirza is all set to tie the knot with Vaibhav Rekhi; know all about the actress' would-be husband

Love is definitely in the air! For the past few days, there have been reports that suggest that Dia Mirza is all set to tie the knot for the second time. While the actress is yet to confirm the news, her photos with her would-be husband Vaibhav Rekhi from their pre-wedding bash have been making rounds online. Dia is all set to tie the knot with businessman Vaibhav today . Wondering who Vaibhav is?

A few hours back, Shah Rukh Khan's manager Pooja Dadlani shared photos from the pre-wedding bash of Dia and Vaibhav and the actress looked pretty in white. Vaibhav was seen complimenting her in a striped shirt and the two looked the happiest. Pooja captioned the photos as "Welcome to our crazy family @diamirzaofficial.. we all love you." Dia took to the comment section and replied by leaving a red heart emoji and confirming the news of her wedding!

Before we tell you more about Vaibhav, let's take a look at the pre-wedding bash photos: 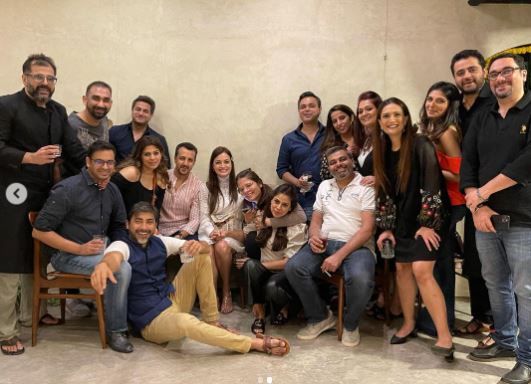 Here's everything you need to know about Vaibhav Rekhi

- Vaibhav is a Mumbai-based businessman and reportedly, he has completed his schooling at Hari Singh Higher Secondary School and his graduation in Business Management from Bharati Vidyapeeth University.

- Vaibhav is associated with Piramal-Capital and Housing Finance and is the founder of Piramal Fund Management Pvt Ltd.

- Vaibhav was earlier married to popular yoga instructor Sunaina Rekhi and the two have a daughter together.

Just like Vaibhav, this is Dia's second marriage as she was earlier married to producer Sahil Sangha. Dia and Sahil got married in 2014 and after staying together for over five years, they got separated in 2019. Dia and Sahil knew each other for 11 years and mutually decided to part their ways in 2019. Dia released an official statement to confirm their separation. In the statement, Dia had said, "We remain friends and will continue to be there for each other with love and respect."

Just like her first wedding, Dia's second marriage will also be an intimate affair with only close friends and family members in attendance.

Reportedly, Dia and Vaibhav met each other during the nationwide lockdown and fell in love. It is also reported that Dia and Vaibhav stayed together at the latter's Pali Hill house and after spending time together, they have decided to take things forward by getting married.