Amitabh Bachchan has become the first Indian actor to receive the prestigious FIAF Award for his efforts to preserve the legacy of film over the years. The veteran actor was lauded for his work by international directors Martin Scorsese and Christopher Nolan in an online event held yestoday.Legendary actor Amitabh tweeted that Deeply honoured to have been conferred the 2021 FIAF Award. Thank you FIAF, Martin Scorsese , Christopher Nolan for bestowing the award on me in the ceremony today. 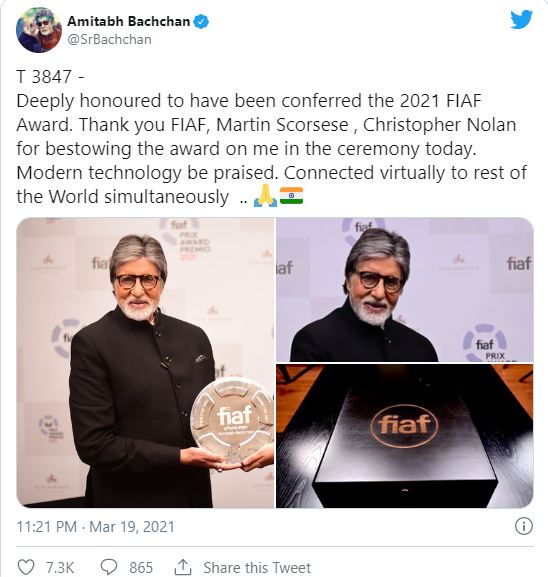 While presenting the honour, Scorsese, the first recipient of the award, said, “Safeguarding cinema is a global cause with champions all over the world and Amitabh Bachchan's advocacy for preserving India's film heritage, really has been exceptional.”

“I'm well aware of the time and effort that Amitabh has personally devoted to this cause. The FIAF could not have chosen a more deserving individual to recognise this year,” he said.

Another recipient, Nolan said it was an honour to present the award to Bachchan and it was a privilege to meet the star in 2018 in Mumbai. “[Film preservation] is unbelievably important work and your voice, your reputation behind this cause adds so much and makes so much more possible. For all these reasons, I just want to express my gratitude, and the gratitude of FIAF and everybody involved with this award, for everything you've done so far, and for everything that you will do in the future,” the director shared.