12 Jyotirlingas And Their Significance at Maha-shivratri

India and devotees of Lord Shiva will celebrate Mahashivratri on March 11. Lord Shiva is one of the most worshipped deities in the country, he is also known as the Natraj, Mahakaal, and the destroyer among the Tridev. There are many temples dedicated to him and among these temples are the 12 Jyotirlingas of Lord Shiva which is the most auspicious pilgrim destination for Shiva devotees

A Jyotirlinga is a special shrine where Lord Shiva is worshipped in the form of a fiery column of light. To simply, Jyoti means radiance and Lingam means the mark or sign of Lord Shiva’s or phallus symbol. It means the radiant sign of the almighty

According to an old religious text called the Shiva Mahapuran, there was once an argument between Vishnu and Brahma with each claiming to be the supreme power. In order to put them to test, Shiva pierced the three worlds into an enormous pillar of light called the jyotirlinga. He asked Vishnu and Brahma to reach the extreme of the pillar saying whoever finds it first will be victorious.

Brahma rocketed in the upward direction while Vishnu went downward chasing the pillar which they did not know was infinite. Brahma returned claiming that he had found the end while Vishnu honestly accepted defeat. Enraged by Brahma’s lies, Shiva appeared as a second jyotirlinga and cursed Brahma that he would have no place in any of the religious ceremonies while Vishnu will be worshiped for eternity.

There are 12 Jyotirlingas where it is believed that Shiva appeared as a form of light. The Jyotirlingas symbolizes the reality and power of Shiva 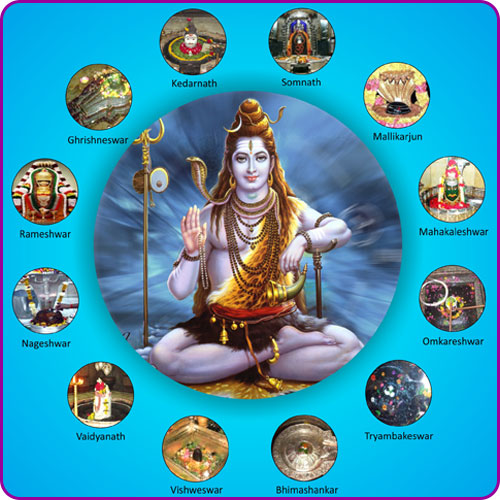 Check out 12 Jyotirlingas of Shiva with their location in India:

Somnath Jyotirlinga in Saurashtra, Gujarat: The Somnath Temple in Gujarat is one of the most famous of the twelve jyotirlingas, it is a major pilgrim site that has been renovated quite a few times. The reason behind its popularity is that it is located near a Triveni Sangam which means a confluence of three rivers – Hiran, Kapila and Saraswati in this case.

Mallikarjun jyotirlinga in Srisailam, Andhra Pradesh: Mallikarjunaswamy temple is a popular Shiva temple in south India which is located in the religious temple town of Srisailam. The Mahashivratri celebrations in Mallikarjunswamy are renowned all across India and are worth witnessing.

Mahakaleshwar jyotirlinga in Ujjain, Madhya Pradesh: Ujjain play host to Kumbh Mela, and Mahakaleshwar temple is one of the biggest tourist attractions. It is situated by the Rudra Sagar lake, the temple is visited by a huge number of devotees on a daily basis.

Nageswar jyotirlinga in Gujarat: One of the oldest shrines, the Nageshvar jyotirlinga is said to be in Durkavana meaning a forest that finds mention in old texts.

Kedareswar jyotirlinga in Kedarnath, Uttarakhand: One of the four major pilgrim centers forming the char Dham pilgrimage for Hindus, Kedarnath is located high up in the mountains of Uttarakhand and is visited by a huge number of devotees every year.

Tryambakeswar jyotirlinga in Nasik, Maharashtra: Most of us have heard of Shirdi, but not many are aware of pilgrim center Trimbakeshwar or Tryambakeshwar. It is a famous religious destination for Hindus in India. Located in the town of Trimbak, it is popular for being home to one of the twelve jyotirlingas.

Rameswar jyotirlinga in Rameswaram, Tamil Nadu: One of the most popular temples in India, the Rameswaram temple is known for its brilliant architecture and the jyotirlinga, of course.

Visweswar jyotirlinga in Varanasi, Uttar Pradesh: Varanasi is one of the holiest places to visit in India and the Kashi Vishwanath temple is its biggest attraction thanks to the Visweswar jyotirlinga here. The grand aartis held here during major festivals, especially Mahashivratri, are an experience you cannot afford to miss.

Ghrishneswar jyotirlinga in Devagiri, Maharashtra: Located in a small village called Verul near Devagiri and Aurangabad in Maharashtra, Grishneshwar or Grushneshwar finds mention in the ancient Shiva Purana as one of the jyotirlingas.