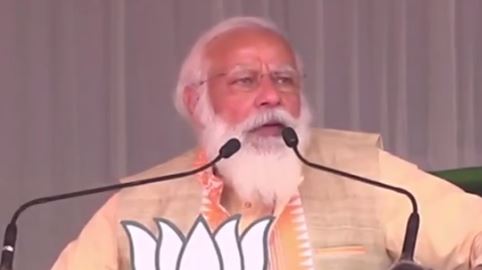 Prime Minister Narendra Modi on Thursday expressed confidence in the party's victory and said that people trust the National Democratic Alliance (NDA) for the development, peace and security of the state.

Kokrajhar is firmly with NDA. Watch my speech. https://t.co/9oULPseIl3

While addressing a public rally in Assam's Kokrajhar, PM Modi attacked the Congress-AIUDF alliance saying that this is an election between the 'maha jhooth' of Mahajot and 'maha vikas' of the double engine.

"Football is very popular among youth here. If I've to speak in their language, I would say that the people have yet again shown a Red Card to Congress and its Mahajot. People of Assam trust NDA for development, peace, security of the state," he added.

The Prime Minister expressed confidence that the NDA will form the government in Assam and said people have stamped the victory in the first phase of polling.