The longlist for the British Academy Film And Television Awards (BAFTA) 2021 is here and our very own ‘desi girl’ Priyanka Chopra Jonas is on the list with 14 others in the Best Supporting Actress category for her performance in the Netflix film The White Tiger. The actor was given a shout out on Twitter by her cousin Parineeti Chopra who wrote a lovely post boasting her Mimi didi’s achievements. 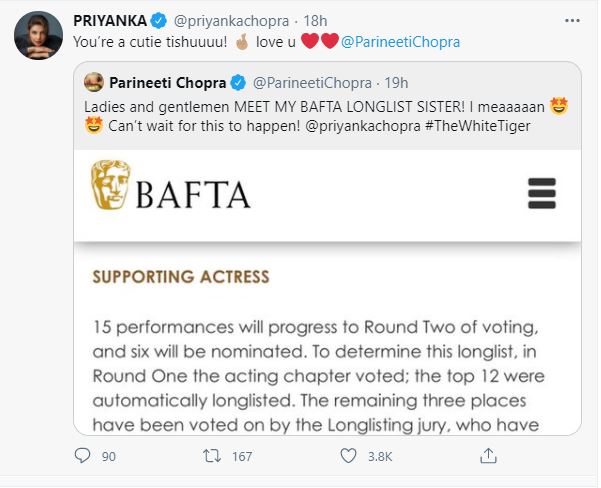 The film is an adaptation of Aravind Adiga’s Man Booker Prize-winning debut novel of the same name. Priyanka and Rajkummar Rao play the role of a rich Indian couple, while Adarsh plays the role of their driver who gets his fortune changed after an accident. As mentioned on the official site of BAFTA, the final list of the nominations, selected from the longlist, will be out on March 9. The awards ceremony is scheduled to happen on April 11.