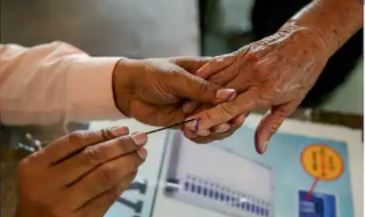 Polling for the second phase of the Kolkata-West Bengal assembly elections is going on. Votes are being cast for a total of 30 seats in the four districts here. So far, 29.27 percent voting has been done. According to the Election Commission, Bengal has recorded 29.27 percent voting till 11 am. There have been reports of violence at some places in the state.

These include East and West Medinipur, Bankura and South 24 Parganas. The elections are being held following the Corona related rules. The voting time has also been increased. Violence has been reported in many places. The round of allegations against parties is continuing. The BJP has alleged that TMC activists attacked its female polling agent at Keshpur in West Medinipur. The polling agent was taken to the hospital. The attack on BJP leader Tanmay Ghosh is reported. His car has been vandalized.

At the same time, Trinamool Congress candidate from Bankura Assembly seat and well-known Tollywood actress Sayantika Banerjee have been accused of influencing voters by giving them money. In a video footage, Sayantika is seen going out after offering prayers at a temple in Bankura and giving money to the people.

According to the ADR report, a total of 191 candidates are trying their luck in the second phase in West Bengal. Of these, 152 are male candidates, while 19 are female candidates.