UP CM Should Change the Person He Sees in Mirror Every Morning: Akhilesh Yadav 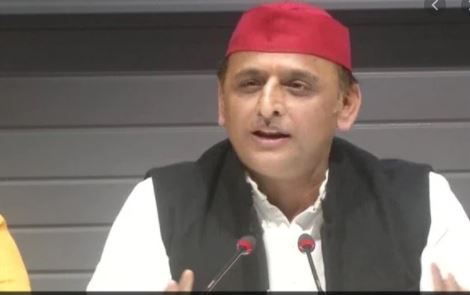 Akhilesh said, “I thank you for giving me the chance to put my words forward. The name of the session you gave could not have been better, the way diesel and petrol prices are rising people will have to ride bicycles in near future.”

Akhilesh said, “In the last four years people are wondering where the manifesto, that the BJP promised in the state elections, is. There was no clear vision of the BJP or any blueprint for taking the state forward. The government has re-inaugurated projects done during the SP regime and now they are doing MoU of MoU. The CM should change the person he sees first in the mirror in the morning.”

“Today if I want to ask or want to know something, then such people are sent to jail. If the government doesn’t like something then they put people in jail. All they have done is that they have changed the name. Today UP is lagging behind in health and education and this is clear by the official data of the government itself,” said Akhilesh.

The former chief minister criticised Covid-19 management in the state. He said, “Monkeys took away the Covid-19 samples in Meerut, one kid died due to a snake bite at a quarantine centre. Lakhs of people died while walking on foot from Rajasthan and Maharashtra, but nothing was done for them. Their ministers died, salaries of the people were slashed, people lost jobs, but they say COVID management was done well.”

Yadav said the BJP must tell the people of Uttar Pradesh when they will get free vaccination. “When the SP government is formed in the state, we will give free vaccines for everyone and I will get vaccinated only when it’s free for the people.”

Commenting on the recent statement by Adityanath on SP members donning red cap in the Uttar Pradesh Assemly, Akhilesh said, “BJP deliberately wants to deviate from the core issues.”

Yadav added, “People with black caps have black hearts. We wear red caps in Vidhan Sabha and Lok Sabha as it’s our political uniform and it’s a message from our leaders like Ram Manohar Lohia. Red is a vibrant colour and also the colour of happiness. If we look at the dress then we will know who is the dramebaaz and from the drama company. Some are big and some are small dramebaaz. The language used by CM is not the one used in the house. This is a sign of arrogance. Opposition should be respected. Only parliamentary words should be used in the house.”

Yadav also attacked the Uttar Pradesh government on the Lucknow-Ghazipur expressway saying, “I want to ask the CM if what they are making is as per the laid down standards and specifications and safety protocols? The government should answer. They don’t want to discuss core issues that’s why they bring up issues like red cap. By the way, the land for the Purvanchal expressway land was acquired by the SP government.”

Speaking on the issue of Ram Mandir donation, SP Chief said, “We don’t have the word Chanda (donation) in Hindu mythology when it comes to puja.”

During his session Yadav also pointed out that the NHRC had given the maximum notices to the Uttar Pradesh government over custodial deaths. Speaking of the law and order situation in the state he said, “Everyday there is a serious crime in the state, girls are not safe in the state anymore.”

On the ongoing farmers protest, Yadav said the government must tell the farmers where they can get MSP. He said, “Rakesh Tikait is an old leader, when I spoke to him on the phone I said you are a brave son of a brave father. I can’t comment about his political journey.”