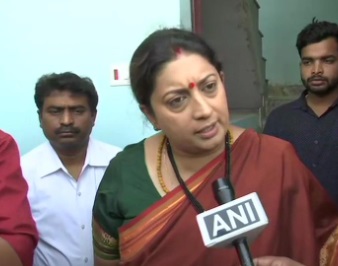 Union Minister Smriti Irani has accused Rahul Gandhi of capturing a booth in Amethi. Smriti has shared a video tweet that Rahul Gandhi is capturing booths. During the interaction with the media, Smriti said that she has complained to the Election Commission and the administration and demanded action.

Smriti Irani said that in Amethi, one person had an Ayushman Bharat card and the hospital refused to treat him and he died. Rahul Gandhi is a trustee in this hospital. She said that Gandhi families are so abhorrent that they are ready to face the death penalty of a person, because they love politics, and not the poor and the country's people. Simultaneously, Smriti Irani said, I have so much confidence in the victory that the Congress candidate is not in the field.