The first poster of Saina, a biopic on India's star badminton player Saina Nehwal, is out, and the film is scheduled to hit the theatres on 26 March this year. The poster shows a hand, wearing a tricolour wristband, and a shuttlecock. Parineeti Chopra stars in the much-anticipated sports biopic, which has been produced by Bhushan Kumar, Krishan Kumar, Sujay Jairaj and Rasesh Shah.

The film has been written and directed by Amole Gupte, who has previously helmed critically acclaimed Taare Zameen Par and Stanley Ka Dabba among several other films. According to a report on Bollywood Hungama, the makers were first thinking about releasing the film on Amazon Prime Video. But now that theatres are opening and the vaccination drive is underway, they thought the film deserved a theatrical release first.

Chopra took to Twitter and shared the first poster of the film. 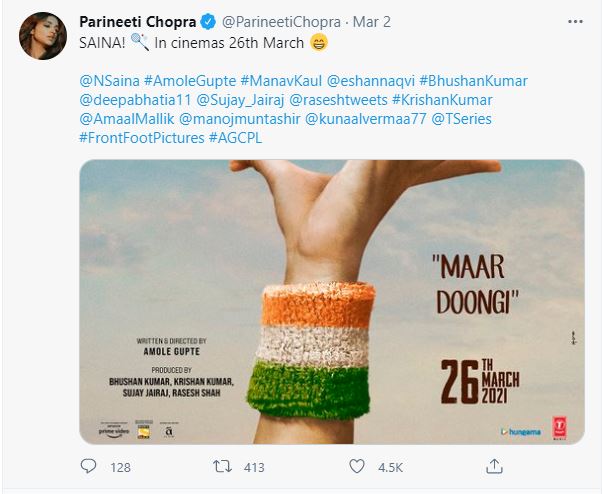 Saina is based on the life of India's ace shuttler and was first scheduled to be released in September 2020. That couldn't be possible due to the COVID-19 pandemic that turned the world upside down.

Interestingly, Shraddha Kapoor had signed the film first but had to withdraw herself after her shooting dates conflicted with other engagements. Actor-director and playwright Manav Kaul will be seen essaying the role of Pullela Gopichand, Saina's coach. According to a report on olympicchannel.com, the production team has recreated at least 12 different courts to showcase various international venues in the film.

March is going to be a crucial month for Parineeti, who will see back to back releases — first, on 19 March, Sandeep Aur Pinky Faraar wherein she is paired with Arjun Kapoor and then Saina the following Friday. Parineeti was most recently seen in  The Girl On The Train, which released on 26 February on Netflix.