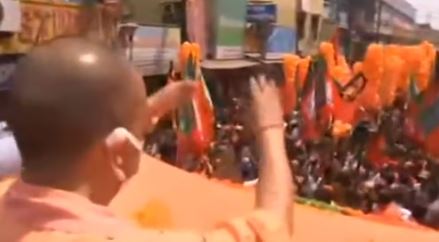 Howrah-Uttar Pradesh Chief Minister Yogi Adityanath held a roadshow in Uluberia in Howrah district on Saturday, campaigning for the BJP ahead of the third phase of the West Bengal assembly elections. Standing on a vehicle adorned with flowers and BJP flags in Gangarampur area of ​​the district, Adityanath greeted the crowd of enthusiastic people gathered there. During the road show in Howrah, CM Yogi Adityanath said that the President of Trinamool Congress and the Chief Minister of West Bengal have become extremely opposed to Lord Ram.

He said that now Didi has come in opposition to Ram, she says that I hate the name Ram. It has been said here that one who is not dear to Rama and mother Sita, no matter how dear he is to you, should be banished like an enemy.