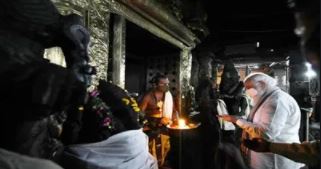 A traditional welcome with ‘poorna kumbam’ was accorded by the temple priests. He offered prayers to Goddess Meenakshi and Lord Sundareswarar. Mr. Kannan said that traditional puja was performed at both the sannathis.

Though this is the first time Mr. Modi visited the temple after becoming Prime Minister, he recalled to Mr. Kannan that he had offered prayers long back as Chief Minister of Gujarat. The Prime Minister eagerly listened to descriptions about the historical importance of the temple. He also enquired about the sculptures in the temple.

After spending 45 minutes in the temple, he left for his hotel. Former Prime Ministers Jawaharlal Nehru and Indira Gandhi had visited the temple in the past, Mr. Kannan added.