Telangana boxer Nikhat Zareen continued her marvellous performance in the ongoing Bosphorus Boxing tournament in Turkey. A day after stunning the reigning world champion Paltceva Ekaterina 5-0 to enter quarterfinals in the 51 kg category, the boxer from Nizamabad thrashed two-time world champion Kyzaibay Nazym of Kazakhstan 5-0 in to enter semifinal and assure herself a bronze, on Thursday.

This is her first tournament since pandemic and the former world junior champion didn’t show any rustiness in her 5-0 victory. 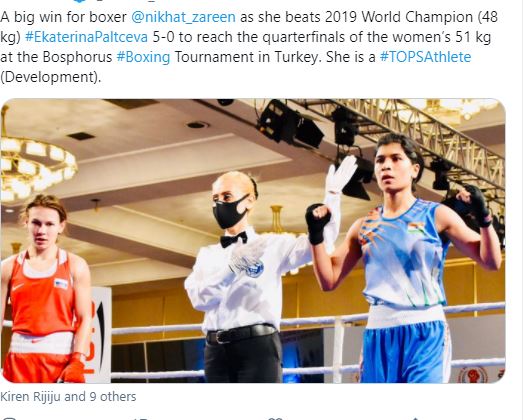 Nikhat, who fights in the same weight category as Indian boxing legend Mary Kom, had said she had prepared well for this tournament, before her departure to Turkey. Devoid of any competition, she has been working on her fitness and the game in the past one year. I am delighted that I am able to represent the country and do what I love the most. The last time I played a tournament was in January 2020 and returning to the ring after more than a year will be challenging. I am working hard and will give my best to win gold for the country,” she said ahead of the tournament.