Mithali, who is leading the side against South Africa women, in the 3 rd ODI in Lucknow, was dismissed for 36 but not before reaching a milestone in her 212 th ODI game for her country. 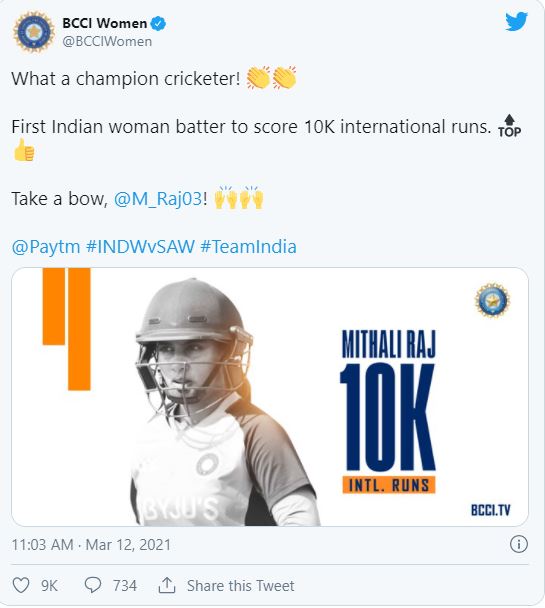 The 38-year-old joined England's Charlotte Edwards in the elite club. She achieved the feat with a boundary off Anne Bosch in the 28th over of India's innings.

On Friday, Mithali walked in at the fall of Smriti Mandhana. An experienced hand, Mithali failed to capitalize on a good start and was caught by Mignon du Preez of Anne Bosch for 36

After reaching the milestone, Mithali departed of the next ball, flicking a Bosch delivery straight to du Preez at midwicket. She made 36 runs off 50 balls and hit five boundaries in the process.

An experienced campaigner for India, Mithali has been a lynchpin of India batting since making her debut way back on June 26, 1999, against Ireland Women in ODI.

In October 2019, she became the first women to complete two decades in ODI cricket .

Her debut for India came at the age of 16 and she announced her arrival in international cricket with an unbeaten 114 against Ireland.

Her passion for Bharatanatyam is well-known and so is her immaculate footwork, which has helped her notch up seven ODI centuries and one Test century. She is the only Indian captain to have played in two 50-over World Cup finals. Perhaps the only thing missing for her trophy cabinet is the World Cup Trophy.