The Liquor Welfare Association in Uttar Pradesh has written to Chief Minister Yogi Adityanath and requested for opening of the liquor shops during lockdown in the state.

The General Secretary of the Association, Kanhaiyalal Maurya, stated that there is daily loss of over Rs 100 crore due to the closure of liquor shops in the state.

He wrote that the shops have been shut since the UP Panchayat elections.

Maurya also said that there is no mention of the closure of liquor shops in the government's order and that the license holders have also not received any order from the Excise Department.

"This has created confusion among liquor license holders," Maurya wrote in a letter to UP CM. 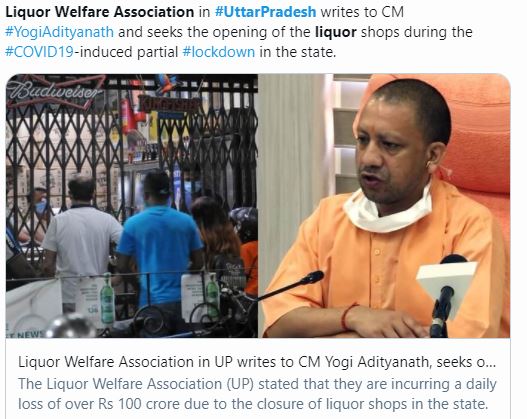 He also told Yogi Adityanath that the shop owners are concerned about the fixed monthly quota and license fees.