Fire on Bus in Lucknow-Agra Expressway, passengers saved their lives by jumping from bus. 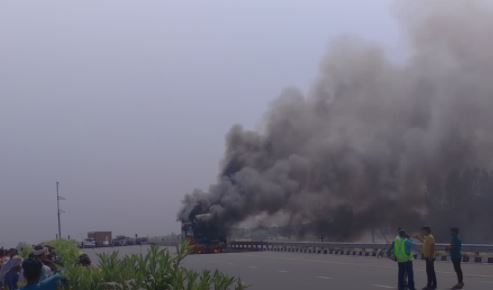 A major accident survived to happen today at the Etawah-Agra Lucknow Expressway. A sleeper bus going from Purnia in Bihar to Delhi was gutted, there was no loss of life during this period. The incident is from the Usharahar police station area of ​​Etawah. On receiving the information of this tragic accident, Takha Deputy District Magistrate Satya Prakash Mishra, Deputy Superintendent of Police and Usrahar police station in-charge Amarpal Singh reached the spot with a heavy police force.

This incident of fire occurred around 10 am today. It is being told that as soon as the bus caught fire, the driver and operator of the bus escaped leaving the bus on the spot. Passengers in the bus have saved their lives by jumping. After knowing about the bus fire incident, two fire tenders from another district fire department of UPDA reached the spot. However, by the time the fire brigade reached the spot from the headquarters, the bus was ablaze.

As the information there were 50 to 70 passengers in the bus, who got down from the bus due to fire and escaped, but during this time most of the luggage was left in the bus which was burnt down. Satya Prakash Mishra, Deputy District Magistrate of Takha, says that arrangements are being made to send the passengers of the bus to Delhi, and the district and police administration is also making arrangements for their food and drink.