It has been 30 years since Akshay Kumar entered Bollywood, and to say his journey has been eventful would be an understatement. From outsider and struggler to National Award-winning superstar has been a long road, and Akshay says entering the industry is easier than maintaining one's position and coping up with everything. 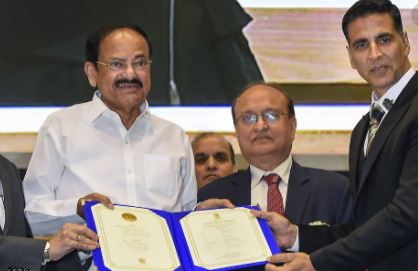 Over the years, Akshay has held on to the advice his father once gave him, as he surged ahead in his career. "I follow what my father taught me -- keep working hard. Kal ki chinta na karo, aapne aap sab kuch theek hona shuru ho jayega (Stop worrying about the future, everything will get sorted out)," he shared.

Today, Akshay has developed a reputation of backing stories that have hues of patriotism and nationalism, besides films with socially-relevant content. "I do films that are responsible and also the films that are commercial. I am not a teacher," Akshay said, on his way of picking projects. "I do films I like, and the messages I like. Sometimes there is a message, and something there is no message. I do different types of films and I want to continue doing them in the future," he continued.

"I don't want to be a teacher," the superstar asserted, adding: "I get associated with the message I believe in. I made a film on sanitary pads, and did one on the importance of toilets. Akshay continues that he also made one on science. I have made different types of films."

The actor is committed to continuing on the same path -- something that is reflected in his upcoming work slate. It is said that over Rs 530 crore is riding on him, with the films that are slated to release this year.