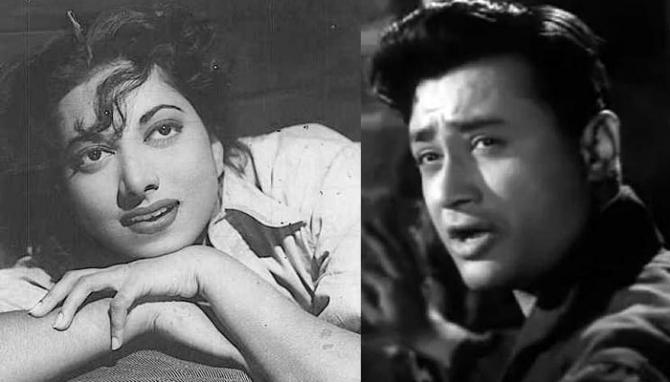 There can never be another like him in the film industry. Generations before Shah Rukh Khan floored moviegoers with his romantic image, it was the legendary actor who made girls of every age group go weak in the knees with his debonair and handsome looks. There's not an ounce of doubt that he was the real ‘heartthrob’ in Bollywood even before the word became famous. During his career spanning over six decades, Dev Anand performed varied roles that only a handful people could pull off. He carved a niche for himself with his unmatched talent and inimitable charm, which was why women fell head-over-heels for him

His immense popularity among the females had made him the king of romance both on and off screen. Perhaps this is the reason why Dev Anand's autobiography was titled 'Romancing with Life'. As a matter of fact, the superstar had learned the art of flirting quite early in his life. He gradually perfected the art and played it with finesse. While many women (who Dev left) kept yearning for him, the legend also suffered his share of heartaches.

On his birthday, we decided to revisit his tragic love life with Suraiya, who shared screen space with him in the 1948 movie, Vidya. It was the same year when Dev saab got a big break in the industry with Ziddi, and caught everyone's attention. By that time, Suraiya was already a huge star. For Dev, it was just his first step to stardom. They met on the sets of Vidya for the first time, and Dev was pretty much confident to act alongside her. The very first scene they shot had Dev kiss Suraiya on her cheek, with she hugging him from the back. And the scene acted as an ice-breaker between the two

The two had no clue that a flirtatious conversation would end up in a serious love affair. Over the next three years, they worked together in at least seven movies, and coincidentally, all of them were big hits. Every movie they did together brought them closer to each other, their romance kept hidden under the suspicious eye of Suraiya's grandmother.

“There was not a single day when Suraiya and I did not meet or talk to each other on the phone. I was in love. Not that I hadn't fallen in love before. I had been physically and emotionally involved before, and had my share of love-affairs. But they were with women already married, with a past of their own. This time it was as if two eligible beings, suited for each other, had got together, lighting a torch for young love, openly in the public eye, with the approval of their admiring fans,” Dev Anand had confessed in his autobiography.

Dev used to regularly visit Suraiya's Marine Drive apartment and soon tongues started wagging about their love affair. And it soon reached her grandmother's ears, who was of the film opinion that "a Hindu marrying a Muslim girl was simply an untenable situation". However, this wasn't the reality. It was all about losing Suraiya's money who was like a goose who laid golden eggs. Even her mother, who had approved of her relationship, couldn't put her foot down for her daughter's happiness against her own mother's strict diktat. And that's how the much talked about love affair ended leaving the two lovers forever heartbroken.