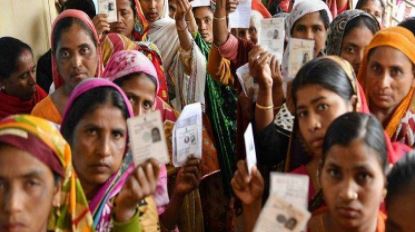 Voting is going on for the assembly elections in five states of the country, including New Delhi-West Bengal. Voting for the third phase is in Bengal, Assam, voting is being held in all seats in Kerala, Puducherry, Tamil Nadu. Long queues of voters have been seen since morning, veterans are also voting.

At the same time, a round of allegations are going on in the Bengal elections, in this episode, TMC candidate Sujata Mandal has been attacked in Arambagh, TMC alleges that they have been attacked with bricks. He said that some people came in masks, who attacked on her. Najibul Karim, the candidate for Bengal's Khanakul Assembly, has alleged that BJP workers have misbehaved with him. TMC candidates have sat on a dharna in protest.

Many veteran celebrities including Rajinikanth and actor-politician Kamal Haasan have cast their votes in the voting which started from 7 am here. Star couple Ajit Kumar and Shalini have also exercised their democratic right by voting at a polling station here. Wearing masks to avoid crowds of his fans, he reached his polling booth about 20 minutes before the start of the voting.