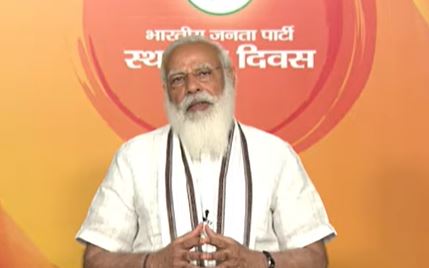 During this, Prime Minister Modi while addressing the party workers said that it has been the mantra for the Bharatiya Janata Party that there is a person bigger than the party and a country bigger than the person. PM Modi said that today forty-one of the founding days of the party are being completed. These 41 years are a witness to how a party works with service and dedication. Where does the tenacity and sacrifice of a worker reach a party?

The Prime Minister said that there will be no district where two to three generations of a worker has not been spent. The party salutes every such worker and we have been guided by leaders like Atal ji, Shmaprasad Mukherjee, Respected Advani ji, Respected Murali Manohar Joshi ji. I salute them.