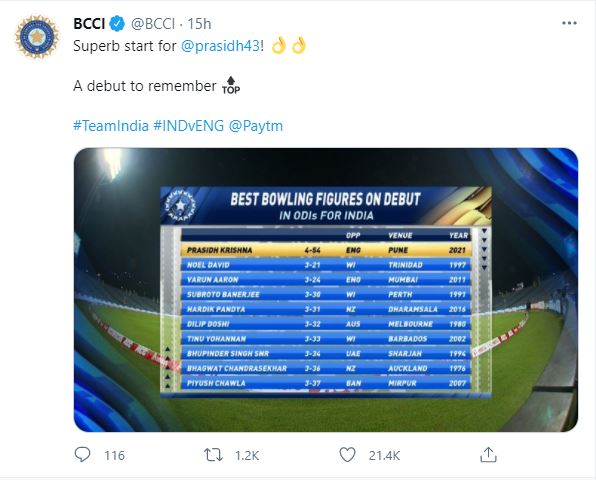 After an emotional maiden fifty by Krunal Pandya, it was time for the 25-year old pacer from Karnataka, Prasidh Krishna to shine. The 6'2" tall hit-the-deck bowler was expensive in his first spell as he went for 37 runs in his first three overs. However, it was not just Prasidh, all the bowlers proved to be expensive in the first 14 overs of the innings as England openers Jason Roy and Jonny Bairstow were in a little hurry as they stitched a 131-run partnership in just 14 overs.

But, it overspeeding kills and that's what happened with England as Prasidh drew the first blood. He removed Jason Roy, who missed his second half-century on this limited-overs tour. It was start of the night for Prasidh, who was going to turn one of the heroes.

In his next over, he accounted for star all-rounder Ben Stokes as the economy started to come down and the wicket column witnessed an increase one by one. The skiddy and nippy nature of Prasidh's bowling was on full display after the pacer got a couple of wickets. The seam was landing hard and causing trouble for the batsmen on a wicket, which started to aid the seam bowlers in the latter half.

Prasidh came back in the second spell and broke an important partnership between Sam Billings and Moeen Ali to end up with figures of 4/54, going for just 17 runs in his next 5.1 overs. Prasidh also broke a 24-year old record for an Indian bowler in ODIs on debut. His 4/54 are now the best figures for an Indian bowler on ODI debut breaking Noel David's record of 3-21 against the West Indies in 1997.