Anushka Sharma, who is on a short break from work, is living it up with husband Virat Kohli. The 31-year-old actress, who is accompanying Virat on his West Indies tour, shared a sun-kissed picture of herself in a bikini on Instagram.

Clad in an orange and pink bikini, Anushka looks beautiful with her hair pulled back in a bun. Sharing the happy picture from a beach in Antigua, Anushka wrote, "Sun kissed and blessed." 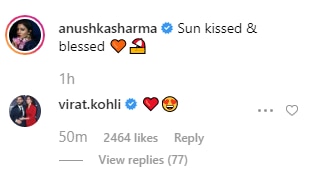 Virat, too, shared a beautiful photo from the picturesque beaches of Antigua. Earlier, Virat posted a picture reminiscing his 11-year-long journey in cricket. Sharing the photo, he wrote, "From starting as a teenager on the same day in 2008 to reflecting on the journey 11 years after on this present day in 2019, I couldn't have dreamt of the blessings God has showered me with. May you all get the strength and power to follow your dreams and always follow the right path.. #forevergrateful (sic)"

It was in December 2017 that Virat and Anushka tied the knot, and since then, the two have been busy giving relationship goals.

Anushka recently opened up on being married to the love of her life. Anushka Sharma told Filmfare that the world ceases to exist when she is with Virat.

"I'm married to my best friend. I'm married to my confidant. I'm married to someone I love so dearly just because of the human being that he is. You talk about being misunderstood in life and then you meet someone, who understands you completely. Then the world doesn't exist," said Anushka.

"So for him and me, when we're together, the world ceases to exist. We find solace in one another because of the similarities we share as people. Even when we were dating each other, it was the same thing. I feel extremely happy because he's my family," she added.

On the work front, Anushka was last seen in Zero along with Shah Rukh Khan, and since then, the actress has not signed any new project.

Talking about her break from work, Anushka said, "That's a conscious decision. I wanted to take a couple of months off after Zero. After I got married, it was like a whirlwind. I was back on the sets shooting for Sui Dhaaga: Made In India and later Zero. I was just working back to back. It's important as a creative person to take time off but you deny yourself that. Of course, there's pressure. You're constantly asked, 'Kaunsi film sign kar rahe ho?"